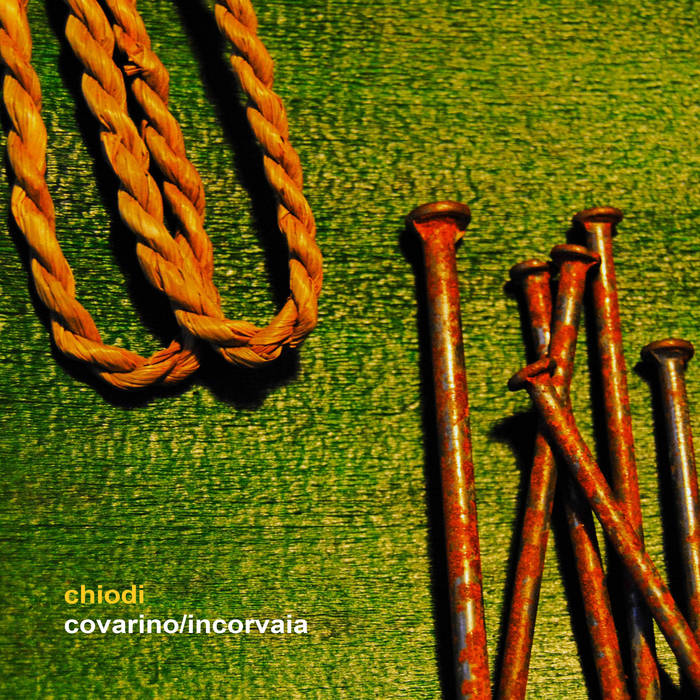 three improvisations recorded in a studio
all tracks are first and only takes,
no overdubs or editing was added to the live recording

recorded and mixed in granada on january 19 and 20, 2018,
by josé alberto chamorro, francesco covarino and alessandro incorvaia

Building on the concept of their first two albums – Perugia (Preserved Sound, 2016) and Granada (Whitelabrecs, 2017) – to play live without overdubs or editing, Covarino/Incorvaia’s new album Chiodi features a minimal set up, occasional noises and silence.

“The only idea we discussed before starting the recording was to play less notes and leave more space, and to play quietly in order to let all those unpredictable room sounds come out – the click of Alessandro’s foot pushing on a pedal, the drum stool creaking,” says Francesco Covarino (drums).

“The sound engineer put a couple of microphones in the room below the studio we were playing in and left the door open, looking for some extra reverb,” says Alessandro Incorvaia (guitar). “But these microphones ended up recording all the noises on the street outside – a rooster, a dog, a car passing by. We loved it all and kept it on the final mix. All the noises you can hear were recorded live, not field recordings that were added later.”